Digging into Native American history in the Adirondacks –

A young boy on my tour last year asked a simple question, “were there any Indians here?” With nowhere to go, I repeated the worn phrase that Native Americans used the Adirondacks as hunting grounds. It was an unsatisfactory answer, for both of us. As a historian of Sagamore, I knew as much as this kid about 98% of the human timeline of the area.

I quickly found a small but growing body of research on Native American history in central and upstate New York. I also learned that these subjects, this knowledge, are not new. From my perspective, I could dig into books and articles on the academic pursuit of knowledge. But Native Americans have been telling their own stories from the beginning. To properly answer this boy’s question, Sagamore needs to welcome the perspectives of the people we’re talking about.

The Eurocentric academic perspective and the Native American oral history perspective are often presented together, one welcoming the other. I contacted John Fadden at the Six Nations Iroquois Cultural Center in Onchiota, New York. John’s father, Ray Fadden, and his family, who lived in the Mohawk community of Akwesasne, opened the center in 1954 so that the general public “could acquire the knowledge necessary to better understand the history, culture, contemporary realities and the potential future of Aboriginal people. nations. The center remains upstate New York’s primary source for discovering a variety of perspectives on Indigenous peoples.

A projectile point and cutting tool found near the shore of Tupper Lake were both dropped shortly after the last ice age when the area was still frozen tundra well over 10,000 years ago. People were in the Adirondacks before it was a forest.

Jennifer Birch, an archaeologist and associate professor of anthropology at the University of Georgia who studies northern Iroquoian life, told her Zoom audience that when the timeline is understood, “the plot will emerge.”

Traditional teaching and popular culture tend to place Native American history into two compartments, pre- and post-European contact. Except that pre-contact goes back more than a decade (the new word today). This vast timeline may seem vacant, but it is simply not recorded by archaeology. From a mainstream perspective, the millennia are just passing. But a lot can happen in 10,000 years.

As the climate warmed and forests grew, toolmaking and the seasonal movements of people changed in ways that can be theorized or, when artifacts are discovered, identified.

What anthropologists call the Eastern Forest Period began around 3,000 years ago when, some say, pots were first lit and the first cultivations began. These activities suggest a more sedentary village life. There is little evidence that people were here in the Adirondacks largely throughout these vast periods of development. Did they live here or did they just hunt? Or were these things the same to them?

Evidence reveals that over the past thousand years, Native American villages have become larger and more established. Dr. Birch and his colleagues excavated palisaded settlements with up to a few dozen longhouses; corn, bean and squash crops; and ritualized burials made nearby. These developments point to more specific social and political hierarchies and tribal identities. Of course, it was these people who first heard the sound of European metal and the gunpowder boom.

The Iroquoian settlements identified on Dr. Birch’s maps are mainly located in the Mohawk and St. Lawrence valleys. The absence of longhouse settlements in the Adirondacks only indicates that researchers have yet to look there. It’s much harder to find ancient postholes and hearths in the boulder-strewn mountains. When I asked about it, Dr. Birch replied, “People lived everywhere, all the time.”

The “hunting ground” theory stems from the idea that it is simply too cold in the Adirondacks and the ground is too thin compared to the surrounding valleys. Why not live where it’s easier? Yet since arriving in the Adirondacks, Europeans have bent over picking up native artifacts. The Indians must be passing through, concluded the shivering whites.

The lingering doubts people had in the Adirondacks may have more to do with semantics than data. They reflect everything we mean by “living”. …Throughout most of human history, people have moved seasonally across large geographic areas they call home, and so has the North Country. It was the only way to survive without depleting local resources.

People have lived in cold climates for a very long time. Doubting that natives can tolerate Adirondack winters says more about our own limitations than theirs. Stager writes, “…absence of evidence is not evidence of absence.” 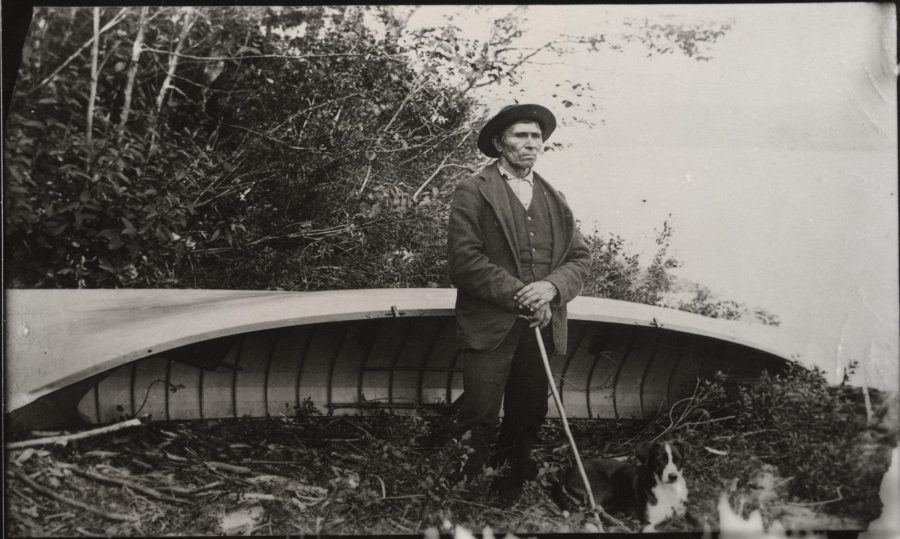 Contact with Europeans quickly changed the lives of Aboriginal peoples. The newcomers brought metal tools, weapons, and marvels like fine cloth and glass mirrors that the natives desired. Whites wanted beaver pelts, so trade relationships formed as well as new rivalries. At times, the Adirondacks became a battleground between native tribes who fought each other for wealth from competing Dutch, French, and English settlers. The sides were taken.

The large confederations of the Northeast lost influence after the American Revolution. The Adirondacks have been roughly divided by the new “owners”, determined to remove timber and minerals. The Abenakis and the Iroquois did what they had to do, working in lumber camps or mines. Some guided white vacationers, some sold wooden crafts and trinkets, and others presented traditional entertainment.

Traditional Americans’ impressions of wilderness changed as industrialization shifted many from frontier farms to smelly towns. The same goes for their impressions of Native Americans. As their struggles to endure were overwhelmed, it became popular to cast them less as threats and more as romantic ties to the fading frontier.

Both the Sagamore and Uncas camps are named after Native American characters from the Last of the Mohicans, a novel published by James Fenimore Cooper in 1826, some 70 years before the camps were built. Set in 1757, the book is a whimsical account of camaraderie and conflict between whites and natives in the throes of French and Indian warfare.

William West Durant assumed that by evoking Cooper’s book, his wooded encampments would attract the attention of wealthy buyers. In 1902, just after buying Sagamore from Durant, Alfred Vanderbilt built a new guest house covered in bark and twigs and called it the Wigwam. It demonstrated that Vanderbilt, too, was happy to appropriate Native American names and terms to help romanticize his own foray into the wilderness.

In the 1890s, Raquette Lake resident Alvah Dunning felled a huge cedar beside his new cabin in Brown’s Tract Inlet, adjacent to the present village. Beneath the roots, Dunning found evidence of an ancient bed of coals and three small pottery shards, each with decorative incised lines. The tree was over 300 years old, so the broken pots were made by people who had never known Europeans.