New Mexico Democratic State Senator Shannon Pinto of Tohatchi, a member of the Navajo Nation, wears a movement emblem demanding justice for missing and murdered Native women, on the opening day of a legislative session in 30 days in the Santa Fe House of Representatives on January 18. (Morgan Lee/Associated Press file) 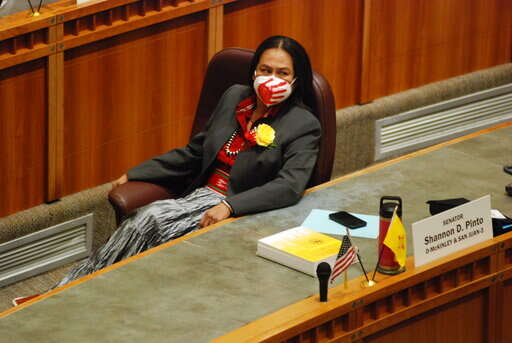 SANTA FE — A bill that would help state prosecutors track and investigate unsolved reports of missing New Mexico natives was approved Monday by the state Senate with a unanimous vote.

A 34-0 Senate vote sent the bill to the State House for consideration. The initiative would create an electronic catalog of missing Indigenous people – many believed to have been murdered – for use by law enforcement and prosecutors with the support of outside financial grants.

The bill also authorizes $1 million in spending by the state attorney general’s office to hire and train at least one specialist to investigate missing Native American cases.

Senator Shannon Pinto, a member of the Tohatchi Navajo tribe, said the bill was inspired by haunting cases of unsolved disappearances.

She cites the case of Anthonette Cayedito, who was last seen in April 1986 when she was 9 years old with freckles at her family’s home in Gallup.

“I hope there will be a closure before I reach my time here on this earth,” Pinto said.

Democratic State Senator Leo Jaramillo d’Espanola noted that the initiative has the support of three tribal communities in his district and the Tewa Women United advocacy group for Native American rights.

“I think the more attention we pay to this issue, the better,” Baca said. “I’m glad we’re not ignoring it anymore.”

Lawmakers are working around the clock during the frantic final days of an annual 30-day legislative session that ends at noon on Thursday.

Major initiatives on proposed tax cuts, voting access, climate regulation and criminal justice are still under review, along with an $8.48 billion annual spending plan for the fiscal year beginning July 1.